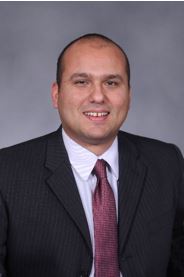 Every quarter, we like to take a moment to recognize our employees and highlight their unique career paths, diverse backgrounds and impressive achievements. This employee spotlight is dedicated to Lead Equity Analyst and Portfolio Manager, David Yepez.

David is originally from Venezuela, where he grew up five minutes from the beach and graduated early from high school at the age of 16. During that time, Venezuela’s economy was weakening, and with his father’s encouragement, David moved to the U.S. after graduation in search of a more stable future.

When David arrived in the U.S., he had to start from scratch. He decided to further his education by attending the University of Oklahoma, where he learned English and earned a bachelor’s degree in mechanical engineering.

In the last year of his undergraduate education, David read the book One Up On Wall Street authored by portfolio manager Peter Lynch and was inspired to switch career paths. He was fascinated by investing and became a voracious reader of annual reports and any books about investments.

Soon thereafter, David obtained his Master of Business Administration (MBA) from Southwestern Oklahoma State University. David then kicked off his financial career by serving as a policy analyst at Asset Servicing Group, before moving on to Exencial in 2014.

Exencial’s vibrant culture, enthusiastic leadership team and vision of helping clients drew him to the company. He saw it as a great opportunity to grow and get hands-on experience on the investment side of the business.

David currently co-manages Exencial’s SELECT Equity Strategy and the Exencial Opportunity Fund. He is one of the primary drivers of research and new ideas for which companies to include or remove from those strategies. David’s other daily responsibilities include attending client meetings, training new analysts, analyzing stock market performance and overseeing investment strategies as a member of Exencial’s investment committee. His favorite part of his role is the ability to learn new things every day and help clients reach their goals.

Earlier this year, David obtained his designation as a Chartered Financial Analyst (CFA), one of the most prestigious certifications in the industry.

Outside of the office, David loves spending time with his family, especially his two-year-old daughter Mariana. He enjoys swimming, running, reading and traveling. David recently visited Thailand and Canada and hopes to make it to Japan soon.

Bonds are Back in the Game
Read More

The Reversal of ‘TINA’: Why Equities Are No Longer the Only Game in Town
Read More